A DOUBLE BAZOOKA antenna is an extremely broad-banded Half Wave Antenna that can operate efficiently across an entire Ham band with little change to the SWR.

A DOUBLE BAZOOKA antenna is an extremely broad-banded Half Wave Antenna that can operate efficiently across an entire Ham band with little change to the SWR. The BAZOOKA antenna design was developed by the staff of M.I.T. in the early 1940s for use by the U.S. Government as a radar antenna. It was modified for amateur radio use in the 1950s.

Since this antenna has no exposed metal wire static charges can not build up thus reducing noise by 6dB over antennas constructed of exposed wire. The Double Bazooka is a unique design alternative to a dipole. It is made of coax cable, instead of a single strand of copper wire. The braided copper shield of the coax is the actual RF radiator, and the center conductor acts like a quarter wave matching transformer. The larger diameter of the shield-braid acting as the actual elements gives the Bazooka a wider bandwidth and reduced noise over the old wire dipole. So it covers a wider range of frequencies on each band with lower SWR.

The Maxcon DOUBLE BAZOOKA is made entirely of RG-8X Coax.

The DOUBLE BAZOOKA is recommended to be mounted in an inverted “V” configuration for optimum results. 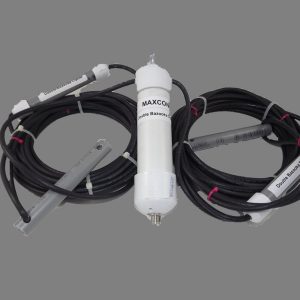